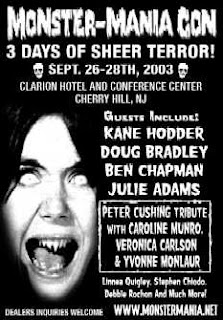 Ok, so I'm a week and a day late for my post about Monstermania, but to be honest, there was really nothing to "report". It's not like MM is the San Diego Comic Con, where horror professionals make huge horror-related announcements on upcoming movies, tv, video games and comic books. No, MM is basically about meeting A level(Robert England, John Carpenter, Bruce Campbell), B level(Rowdy Roddy piper, Zach Galligan, Sid Haig) and Z level celebrities(Dick Warlock, Ari Lehman, Alex Vincent), getting them to sign our posters, DVD's and various body parts.
With that being said, this past MM was severely underwhelming to say the least. The only person I was interested in meeting was the above mentioned Mr. Carpenter, whom I had sign my original Big Trouble in Little China poster and my They Live reprint poster with Roddy Piper's & Keith David's signatures already on it! My brother and I recently learned that Carpenter is a huge basketball fan, so we brought him one of our mother's basketball prints that she drew back in the 70's. He was very appreciative and thought they were gorgeous. After that was said and done, it was nothing but partying and DVD buying for the rest of the weekend. So as you can see, nothing to really "report".
The next Monstermania has been scheduled for March 11th-13th 2011; hotel room to be booked shortly.
~ 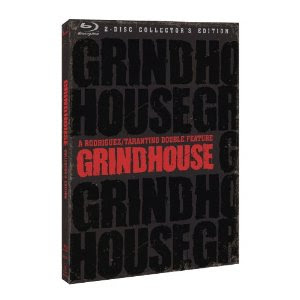 My last blog post I reported on the much anticipated Grindhouse Blu-ray, but did not post the release date, which is Oct 5th. My apologies for being an asshole.
~
In two days it will be September 1st, and you know what that means? Nothing for you, but for me, it will start my arduous task of watching and reviewing at least one horror movie a night till Halloween. That's 61 nights of movie(of something horror/monster/grindhouse-y) watching till my eyes bleed! And I'll be doing it all for you, my dozen or so readers! This, of course, will lead us directly into...
~ 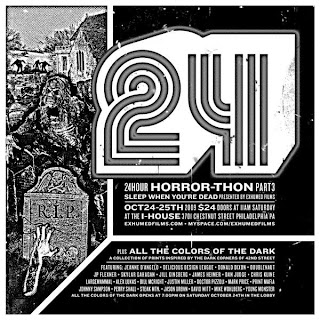 The 2010 Exhumed Films 24 Hour Horror Movie Marathon! Starting at Noon on Saturday October 30th, a bombardment of 14 non-stop horror films will be thrown at a small crowd of 300+, all of which are completely unknown to the blood-craving audience, who're given a list of clues to the craziness they are about to be subjected to!
In the coming weeks I will be doing several posts on the horrorthons of the past, and also posting a handy "tip guide" to those who are going this year(or any others across the country that have sprung up recently).
I'll make this blog post interesting by throwing the very 1st clue from the very 1st horrorthon back in 2007, see if you can guess(it's a little vague, but the answer is more obvious than you think):
Film #1 Slasher Classic
Posted by Thomas A.K. at 3:35 PM No comments:

Folks who know me know that I am not a huge fan of the whole "Blu-ray" movement and the way it's being forced down our throats by the studios, and only a few years after "standard" DVD had been released. As far as I'm concered, picture quality is based on the kind of TV you own, not the DVD player.
Lately though, Blu-ray releases have been getting my attention with great bonus features(don't think I haven't noticed the lack of bonus's on standard, assholes).
One release I've been anxiously waiting for is the Kill Bill: Whole Bloody Affair! WTF TARRANTINO! GET OFF YOUR LOVE BOAT WITH ELI ROTH AND RELEASE THIS GODDAMN MOVIE!

Ok... GRINDHOUSE finally gets released as it was released in theaters back in 2007! Here's the list of what's included as well as box art:

Welcome to my nightmare!

I have been a fan of everything horror going back as far as I can remember. When I was a kid, I would sit on the edge of my folks bed, watching edited-for-television House or A Nightmare on Elm Street, making sure to keep my parents bedroom door wide open as so I could run out if the film got to be "too much" for me. Yes, I was a little wuss.
My love for the genre(mostly Elm Street at the time) got to be so bad as a kid that my folks banned me from watching ANYTHING scary, and not because I was scared at all. Nope, my teachers told my folks that it was hurting my studies. Horror cock-blocking asshole teachers! All this meant was that I was a horror-phile in the making.
Cut to 2 decades later...and I decided to start a blog about horror. Why? I have no idea. This is just my intro blog to...introduce me to all having an interest in whatever the hell it is I have to say on the subject.
My name's Tom. I like cats and nachos. Let's be horror friends!
Posted by Thomas A.K. at 2:44 AM 1 comment: